You are: Home > About > Get to know the URV > Third mission > Report on the Third Mission

Report on the Third Mission

This report on the Third Mission of the Universitat Rovira i Virgili is the second in a series of documents drafted during academic year 2016-2017 to ensure the URV’s accountability before both the university community and society in general. Arranged by sector and prepared from numerous meetings of the Governing Council, these documents make up the Rector’s annual report to the University Senate.

The University’s Third Mission activities have a clear social component that is associated with the public service nature of the URV as a university institution. To comply with the mandate outlined in the University’s Statute, these activities must at all levels aim to improve the quality of life (in the widest possible sense of the term) of the members of today’s society and their future generations. In fact, this has been the vision of the Universitat Rovira i Virgili ever since its creation: rigour in the standards of its tuition, science that promotes advances in society, and a commitment to the transfer of knowledge. It is in fulfilling this commitment that the URV implements its Third Mission strategy, the main communication tool of which is this report.

To provide a comprehensive view of the URV’s Third Mission activities, this document is structured around the five axes of the University’s strategic plan for the Third Mission: the dissemination of culture and knowledge; social action and activities for the university community; internationalization; a system of territorial innovation; and the transfer of knowledge and technology. Each section highlights the main programmes and actions that are carried out, some of which are included in the strategic plan and some of which are new. Most chapters include information about the number of activities that have been organized and the number of people that have taken part in them.

In the final section (balance), a synthetic Third Mission indicator is defined and calculated to illustrate how far the objectives of the Third Mission strategic plan which were set for 2017 have been achieved both overall and by axis.

The data collected between 2011 and 2015 illustrate that, despite the economic recession, the University’s overall activities have accomplished roughly two thirds of those objectives. 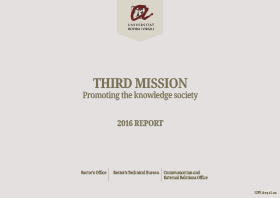